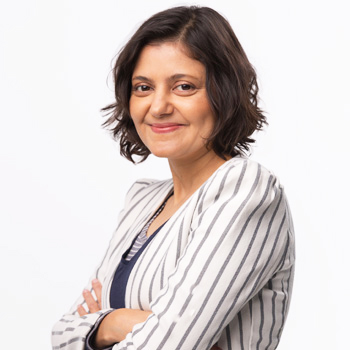 Founder of an ecosystem platform for women, offering support, resources, opportunities and interactions via its social community on SHEROES.com and SHEROES App. A serial entrepreneur, Sairee is credited with building up women at work and future of work conversation in India, besides building a strong technology play to solve the problems of gender disparity in India. Sairee’s community meets deep technology approach has made SHEROES a globally formidable platform, changing the game for women and their aspirations. Over a million women have been directly benefited. A technology entrepreneur and a liberal arts student, Sairee has straddled the best of both worlds in her ventures Newslink, Fleximoms and now SHEROES.

SHEROES is set up to impact over 100 million women in the next decade with Sairee’s leadership. An Aspen Leadership Fellow, Sairee is India’s foremost evangelist for women at work and Convener of The SHEROES Summit – India’s largest women and business forum.

An M.Phil from JNU and a PGDBM holder from IMT Ghaziabad, Sairee kick started her professional career while at college before cofounding her first startup. She later worked at corporates like Heidrick and Struggles and CII. Recognized for her achievements globally, Sairee is a Devi Award winner, apart from Femina Achievers Award, Cartier Award Alumni, Editor’s choice for L’Oreal, Femina Women’s Award, Business Today, Most Powerful Women in Indian Business.